News for friends of MTSO
April 2017
About Us

Scholars from across the country gather at MTSO 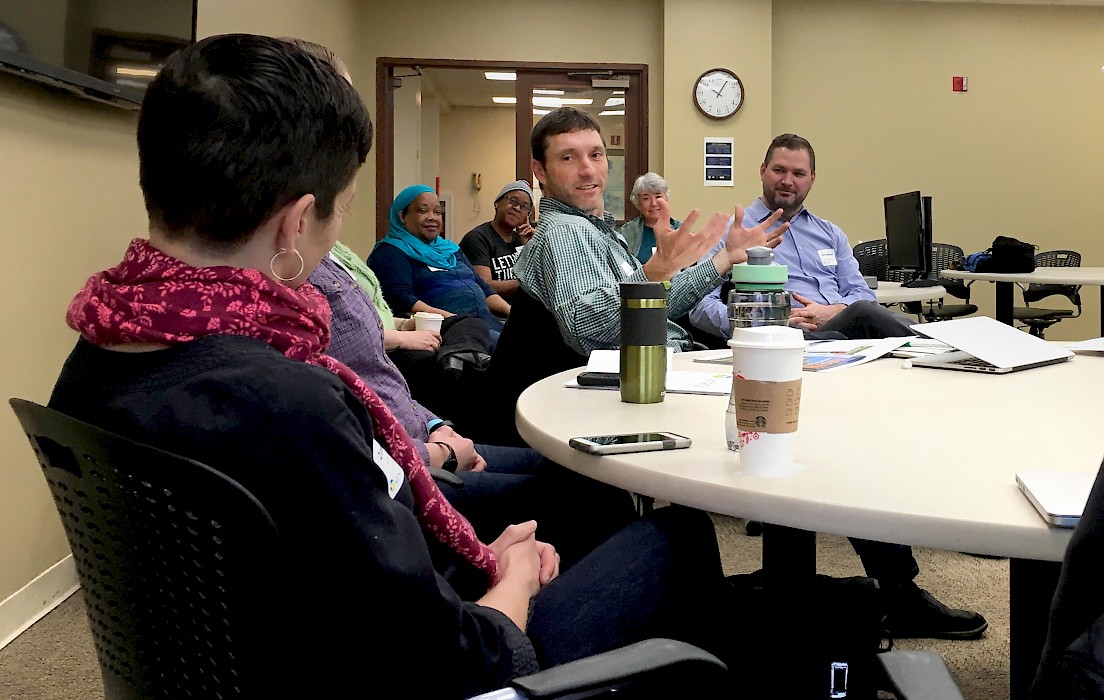 Scholars, ecologists, religious leaders and theologians from eight states gathered on the MTSO campus for the Seminary Hill Colloquy April 5 and 6.

The colloquy participants were:

Among the questions the colloquy engaged were:

“With this gathering, we’re seeking insights and new practices moving toward sustainable justice in each of our institutions, in higher education, and our particular bio-regions,” said MTSO Associate Professor Timothy Van Meter, who organized the colloquy. “We’ll continue to invite wider circles of discussion among peers, activists, farmers and others who are interested in contributing to this network.”

Following the colloquy, a number of participants remained at MTSO to participate in “Listening Circles for Communal Life” April 7 and 8. Facilitated by Melanie Harris and Jennifer Harvey, the retreat experience brought together African-American and white faith communities to connect with each other's stories and the desire for racial healing and enhancing our shared commitment to a deep connection with Earth and all of God's creatures. MTSO presented Listening Circles in partnership with Ohio Interfaith Power and Light.

See a gallery of photos from the Seminary Hill Colloquy on MTSO's Facebook page.

Sex at Church: The Problem of Shame and the Promise of Grace

Combining her experience as a church pastor and psychologist, Karen A. McClintock will address the issue of shame in the church in a workshop at MTSO. “Sex at Church: The Problem of Shame and the Promise of Grace” will take place from 12:30 to 4:30 p.m. April 20.

Tuition for the workshop is $30, which covers all sessions, afternoon refreshments and one-half continuing education unit. Students may attend for free. Advance registration is required and is available here.

The workshop will provide participants with a look into theologically based sexual shame and active shame dynamics in congregations. McClintock will offer ways for congregations and clergy to open up safe and healing conversations, heal sexual wounds, and affirm sexual diversity.

Karen A. McClintock is an elder in the United Methodist Church, psychologist, author and congregational consultant. Raised in Columbus, she attended seminary at Pacific School of Religion and thereafter worked as a parish pastor and chaplain. She assisted healthcare providers with multiple-loss grief during the AIDS epidemic in the San Francisco Bay area.

McClintock’s book Shame-Less Lives, Grace-Full Congregations sheds light on patterns of shame that limit congregational joy and health. Her new book, due to be published in April by Ohio State University’s Trillium Press, is My Father’s Closet, a memoir about growing up with her gay father and her journey to learn more about the secrets her family kept for more than 40 years. Books will be available for purchase at the workshop.

This workshop is offered by the Theological Commons at MTSO, which promotes the sharing of knowledge and experience between students, faculty, clergy and the public for the benefit of all participants and those they serve. 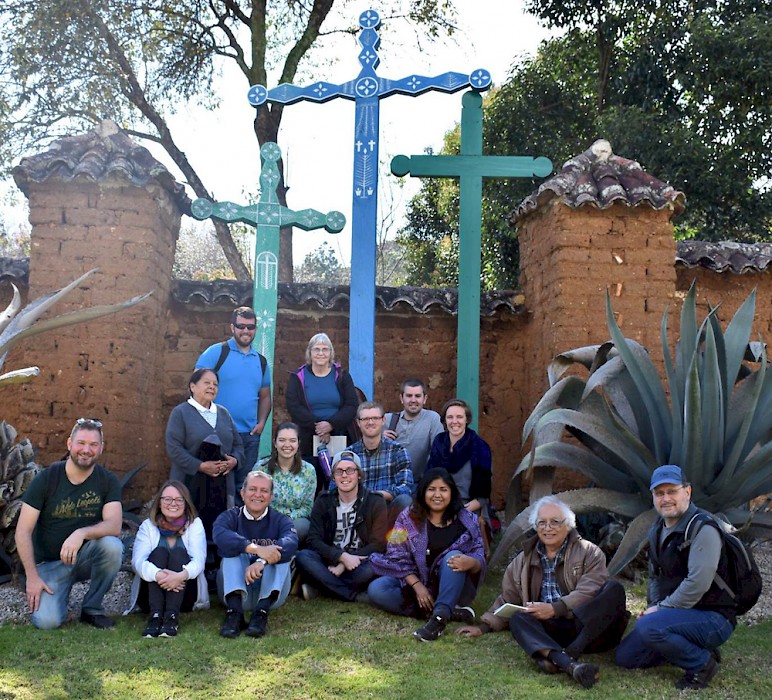 Just off the main square in San Juan Chamula, Chiapas, Mexico, three green crosses face a white colonial church. To the eye of a Christian from the U.S., the scene feels familiar. However, there is far more beneath the surface of recognizable imagery.

The traditional Mayan floral patterns engraved on the crosses identify them as part of a tradition that began long before Spanish invasion brought Christianity to this land. The distinctiveness continues inside the walls of the church, where the light of hundreds of candles reveals a floor carpeted with long green pine needles and a ceiling decorated with fabric mountain peaks and painted sun, moon and stars.

Instead of pews, movement fills every part of the open space as Chamulens and tourists alike examine, admire and venerate statues of saints, which are adorned with indigenous vestments and brightly colored ribbons. The space of this church feels deeply familiar yet full of mysterious and unexpected sights and sounds.

As I pass an indigenous woman kneeling on the floor before 13 candles, murmuring prayers in the Tzotzil language, I feel a deep sense of confusion and intrusiveness. In that moment, I want to understand what is happening, but I don’t know how to make sense of the images and practices surrounding me.

Through cross-cultural immersion trips, MTSO students have the opportunity to leave behind the familiar, to embrace the confusion and awe that come with new experiences, and to learn from direct engagement with people of other languages, cultures and worldviews. During the two-week cross-cultural immersion in Chiapas led by Dr. Timothy Van Meter in early 2017, we learned from indigenous people, social activists, political analysts and church leaders.

The visit to the church in San Juan Chamula provided a deeply visual and thought-provoking experience. The space and rituals we witnessed there were among many encounters with syncretism – the blending of indigenous Mayan and Catholic Christian imagery, beliefs and practices. While the church in San Juan Chamula first struck me as extraordinary in its blend of traditions and mythology, the continuous encounter with similar perspectives helped me realize that syncretism is a pervasive and organic reality in Chiapas.

For example, Father Henry MacLaughlin, a Catholic priest who has worked with indigenous communities for 36 years, explained how impossible it is for many indigenous people in Chiapas to imagine abandoning either the Christian Bible or the ancient Mayan text, the Popol Vuh. They receive the sacred Word of God through both.

I felt a personal connection to Mayan theology’s emphasis on Mother Earth. As a student focused on ecotheology and particularly interested in food and agriculture, I was fascinated to learn that when planting seeds, Mayan farmers first ask Mother Earth permission and apologize for creating a wound as they disrupt the soil.

During a visit to the Kisst Wetlands, an ecological preserve and wetland water-treatment facility, we again encountered the three green Mayan crosses, which had been placed on the riverbed to designate the ecological preserve as sacred space. As I contemplated the three crosses, symbolism deeply rooted in both Mayan and Christian traditions, I was touched by the closeness of God in the soil and water that give us life.

Mayan-Christian spirituality allows many indigenous people of Chiapas to organically express their deeply rooted understandings of the sacredness of creation in a way that made a powerful impact on me. In reflection, I see the church in San Juan Chamula through new eyes and with a new appreciation for the distinctive wisdom that indigenous theology offers.

Through the gracious hospitality offered by many people throughout our two-week visit, I was invited into understanding and appreciation for the beauty of the syncretism of indigenous Mayan theology and Christianity, as well as the deep connections between theology, ecology and resistance of injustice that this syncretism supports within the people of Chiapas. The cross-cultural immersion experience has motivated me to continue exploring the richness of my own heritage and Christian faith for the means to work for ecological and social justice.

Rev. Traci Blackmon, a United Church of Christ pastor and denominational administrator, will deliver MTSO's 2017 commencement address. The commencement ceremony begins at 11 a.m. May 20 in Dickinson Courtyard. Guests are welcome, and tickets are not required.

Blackmon is acting executive minister of justice and witness ministries for the United Church of Christ and also serves as senior pastor of Christ the King UCC in Florissant, Missouri. Initially ordained in the African Methodist Episcopal Church, she served in various ministry capacities for nine years prior to becoming ordained in the UCC.

In the aftermath of the killing of Michael Brown in Ferguson, Missouri, Blackmon was appointed to the Ferguson Commission by Gov. Jay Nixon and to the President's Advisory Council on Faith-Based Neighborhood Partnerships by President Barack Obama. She serves on the boards of the Samuel DeWitt Proctor Conference, Chicago Theological Seminary and WomanPreach!

MTSO will award master’s degrees in divinity, counseling ministries, theological studies and practical theology, as well as Doctor of Ministry degrees, at the May 20 ceremony.

Guidance for ministry and nonprofits

The one-hour seminar will include both live and Internet-based options for participation. To participate online, visit MTSO's Livestream page. Those who have joined Livestream and logged in will have an opportunity to contribute questions in real time via Livestream's chat function.

In the April 27 session, Harper plans to focus on mindful methods to implement while using social media as a tool for churches and nonprofit leaders. Leaders can look forward to learning about techniques, organizing, and helpful hints.

The first session of this seminar, held March 30, focused on mindful social media usage. The video of the first session can be viewed in the MTSO’s Theological Commons archive.

Harper holds a bachelor's degree from DeVry University and a Master of Arts in Practical Theology degree from MTSO.

This seminar is offered by the Theological Commons at MTSO, which promotes the sharing of knowledge and experience between students, faculty, clergy and the public for the benefit of all participants and those they serve.