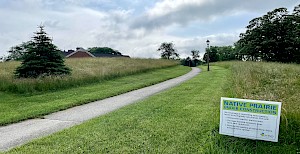 The MTSO campus has evolved in noticeable ways over the past decade, with 10 acres of fields devoted to Seminary Hill Farm and a solar array providing clean power to academic facilities.

The latest metamorphosis involves lawn mowing – or the judicious lack thereof. Under the guidance of MTSO Land Steward Tim Bachelor, selected campus lawns are being converted to ecologically rich prairie. The project covers a total of 3 acres on the hillside in front of Dunn Dining Hall and a plot near the back entrance to campus.

Check out the online archive of our email newsletter.

The Story Magazine and Annual Report

Read issues of MTSO's annual magazine dating back to 2008.

Here are our news stories in reverse chronological order.

Volunteers are invited to join in native tree planting
April 12, 2022

Blackness, Mental Health and Faith: A Conversation Across the Waters
October 14, 2021

Reading Paul in Prison: A Book Launch and Colloquium
August 19, 2021

Students honored at Closing Convocation and Awards Ceremony
May 11, 2021

Isaac Villegas will discuss standing in solidarity with immigrants
January 14, 2021

Bridgeman to participate in Ohio State panel on faith and racial justice
January 11, 2021

Alumni, help us connect with a potential MTSO student
December 3, 2020

MTSO statement in the wake of the killing of George Floyd
May 28, 2020

MTSO honors students at virtual Convocation and Awards Ceremony
May 12, 2020

Isaac Villegas will discuss standing in solidarity with immigrants
January 31, 2020

Reading Noah’s Ark in the Age of Climate Change
January 9, 2020

Reflections from an MTSO delegation's trip to the border
December 6, 2019

MTSO welcomes participants from across the country to ‘On Food and Faith’ conference
May 22, 2019

‘On Faith and Food’ conference brings faith leaders together
February 26, 2019

What do the non-religious seek from a religious pilgrimage?
January 7, 2019

Postdoctoral fellow Kyle Brooks on the art and science of preaching
January 7, 2019

Patrick Kaufman: A Celebration of the Life
September 18, 2018

Lecture considers whether the U.S. has become a post-Christian culture
August 15, 2018

Valerie Bridgeman named dean and VP for academic affairs
May 25, 2018

Louisville Institute postdoctoral fellow will teach at MTSO
May 23, 2018

Mercadante discusses the spiritual but not religious on Harvard Divinity School panel
April 25, 2018

Marvin A. Sweeney will speak on holiness, sustainability and justice
January 29, 2018

Numrich to lecture on space sharing by congregations
January 23, 2018

MTSO students and alums celebrate ordination and commissioning
May 25, 2017

Students honored at closing convocation
May 10, 2017

Matthew and the Pharisees: History or Fake News?
February 27, 2017

Lecturer discusses being Lutheran in a multi-religious world
February 20, 2017

Reflecting on a cross-cultural trip to Korea
October 24, 2016

Thoughts on a cross-cultural trip to the Desert Southwest
October 24, 2016

Alumni and friends invited to join trip to Israel/Palestine
September 30, 2016

Students Honored at Awards Ceremony
May 18, 2016

D.Min. specialization in Ecology, Justice and Ministry offered
May 4, 2016

Alumni and students ordained and commissioned
May 14, 2015

Vasudha Narayanan speaks on religions of India in America
January 29, 2015

John Swinton to speak on disability and theology
January 12, 2015

Terence Fretheim lectures on the care of creation
October 23, 2014

MTSO celebrates ordinations and commissionings
May 15, 2014

Faculty lecture offers insights on spiritual but not religious
January 31, 2014

Mercadante discusses spiritual but not religious in Dispatch interview
January 10, 2014

Boyarin lectures on the ‘Jewishness’ of the New Testament
January 9, 2014

Students honored at Closing Convocation
May 8, 2013

A student reflects on Israel-Palestine
November 6, 2012

Why we call it Israel-Palestine
November 6, 2012

Alum brings growth and renewal to his Kansas church
July 6, 2012

Numrich recognized as full professor
May 1, 2012

Reflections on a cross-cultural trip to India
March 30, 2012

The story of the Allen Ingram Scholarship
October 28, 2011

Apply Now
Email Admissions
Give Now
How green can your ministry be?
Consider the Master of Arts in Practical Theology, with a specialization in Ecology and Justice.
Alumni, connect here
Learn about alumni events, get a transcript, catch up on news about your fellow alums and share your own.