Blaine, who earned a master of divinity degree from MTSO in 2009, received the Mount Award for Parish Ministry. She is senior pastor of Summit on 16th United Methodist Church in the Ohio State University area of Columbus.

"April has led the transformation of a struggling urban congregation into a center of servant leadership for its neighborhood," said MTSO President Jay Rundell in presenting the award. "She has found a way to expand her church's membership and reach while making sure existing members remained invested in an evolving mission." 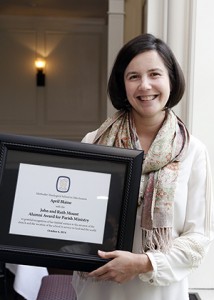 Mitchell, who earned Master of Divinity and Master of Theological Studies degrees from MTSO in 2005, received the Mount Award for Specialized Ministry. He is chaplain and director of church relations for Columbia College in South Carolina.

"It's gratifying to see how Roy's ministry as a college chaplain has come to embody many of the values we hold dear at MTSO," Rundell said. "At Columbia, he has taught classes on food and faith, on immigration, and on world religions. He does these things in addition to his chaplaincy work with students, faculty and staff of more than 20 different Christian denominations – plus those of other faith traditions or no faith tradition."

The Mount Alumni Awards were created in 1990 to recognize MTSO alumni who have achieved distinction in ministry and in service to the school. The award program was created by the late John Mount, a founding MTSO Board of Trustees member, and his late wife, Ruth.

Methodist Theological School in Ohio prepares leaders of many faith traditions for lives of lasting significance in service to the church and the world. In addition to the Master of Divinity degree, the school offers master's degrees in counseling ministries, theological studies and practical theology, along with a Doctor of Ministry degree.