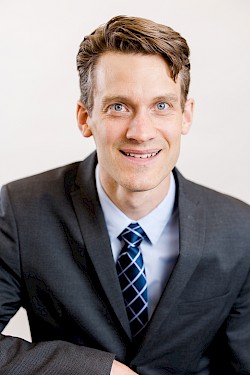 Methodist Theological School in Ohio Associate Professor of New Testament Ryan Schellenberg has won the 2022 Beare Award in recognition of his book Abject Joy: Paul, Prison, and the Art of Making Do, published by Oxford University Press. The Canadian Society of Biblical Studies presents the Beare Award annually in recognition of an outstanding book in the areas of Christian origins, post-biblical Judaism or Greco-Roman religions.

This is Schellenberg’s second Beare Award. He won in 2015 for his book Rethinking Paul’s Rhetorical Education: Comparative Rhetoric and 2 Corinthians 10-13.

“When I read Philippians, I try to remember that this was a letter from an imprisoned migrant laborer, a representative of an ethnic minority – the sort of person it was easy for the authorities to lock up and forget about,” Schellenberg said of his work on Abject Joy.

In her review of Abject Joy for Christian Century, Sarah Jobe wrote, “If Paul was actually quite similar to the people currently held in America's prisons, perhaps America's churches should be treating incarcerated people the way that the church at Philippi treated Paul.”

A judge on the Beare adjudication committee said of Abject Joy, “It has been a long time since such an advance has been made in our understanding of Paul as prisoner.” Another judge added, “This complex and judicious book is theoretically sophisticated, historically rigorous, and ethically reflexive – a rare combination. Even more it is engagingly written in elegant prose and truly difficult to put down."

An MTSO faculty member since 2015, Schellenberg earned his Ph.D. from the University of St. Michael’s College in the University of Toronto, his Master of Arts in New Testament at Mennonite Brethren Biblical Seminary, and his BA at Canadian Mennonite University. His research seeks to ground reconstructions of early Christ groups in lived human experience by placing the ancient evidence in dialogue with contemporary ethnography.

During the 2022 Spring Semester, Schellenberg taught the course “Justice in the New Testament World” to a class composed of MTSO students and incarcerated individuals at the Marion Correctional Institution.

Methodist Theological School in Ohio provides theological education and leadership in pursuit of a just, sustainable and generative world. In addition to the Master of Divinity degree, the school offers master’s degrees in practical theology, social justice and theological studies, along with a Doctor of Ministry degree.