Tim Van Meter finished writing his newly published book in December. But the core of its message came to him more than 20 years ago, when he was in the midst of a different career.

The book is "Created in Delight: Youth, Church, and the Mending of the World," published by Wipf and Stock. Van Meter, assistant professor in the Alford Chair of Christian Education and Youth Ministry, uses it to outline an approach to youth ministry that puts humans' relationship with all of creation front and center.

"I worked as an environmental planner for an engineering firm," Van Meter said. He spent time walking a road corridor in advance of an interstate project in Indiana, comparing the wildlife he found to what was recorded in historical ecological data from the region. And he was struck by the loss of diversity over the decades.

"I realized that a stream where I found just three minnow species once had 65 species of fish," he said. "I'd been in youth ministry prior to doing this work. And it occurred to me that ecological questions and the ecological stress I was seeing firsthand – faith wasn't removed from those questions. A sense of who we are in this place was important both to faith and to ecology." 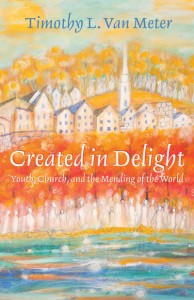 Van Meter calls that realization "the reason I went to seminary." And it's the driving idea behind "Created in Delight."

"Youth ministry is too often conceived as a way to save the church going forward," he said. "I think ministry with youth should be: Let's engage the big questions together, about God, about faith, about the world we live in. And ecological questions are big questions."

He's aware that some might see wrestling with climate change and other ecological concerns as a niche within the world of youth ministry, not a guiding force: "Quite honestly, I think that's the response most folks have. But this is one of the most significant issues that future generations will continue to be affected by.

"Food, climate, soil, water – ecology's at the forefront of all the things we're concerned about. It affects how we deal with poverty and how we deal with other areas of social justice. When we have a serious heat wave, when we have blizzards, when we have hurricanes hitting major metropolitan areas, folks without resources are adversely affected at a much higher level."

In writing "Created in Delight," Van Meter worked to temper his passion for the subject, aiming to be more useful than preachy.

"I don't want to be one more ecological scold or one more moral scold in the faith community," he said. With that in mind, he ends each chapter with suggested sustaining practices for three audiences: the reader, the youth and the full faith community. For instance, at the end of Chapter 3, "On Earth as in Heaven," he suggests talking with youth about climate change and ecology, and asking them where they see hope and where they "pray for hope to be revealed."

Rather than seeking "some sort of purity," Van Meter said, his advice is, "Let's do our best to know our world and live into solutions."

"I'm not trying to speak about big solutions for big problems but about small groups of committed people changing the place in which they live. If people decide their parish will be a place where people, other creatures, and the general environment are healthy and thriving, that can be a powerful way to change a city block."

Methodist Theological School in Ohio prepares leaders of many faith traditions for lives of significance in service to the church and the world. The school offers master's degrees in divinity, counseling ministries, theological studies and practical theology, as well as a Doctor of Ministry degree.