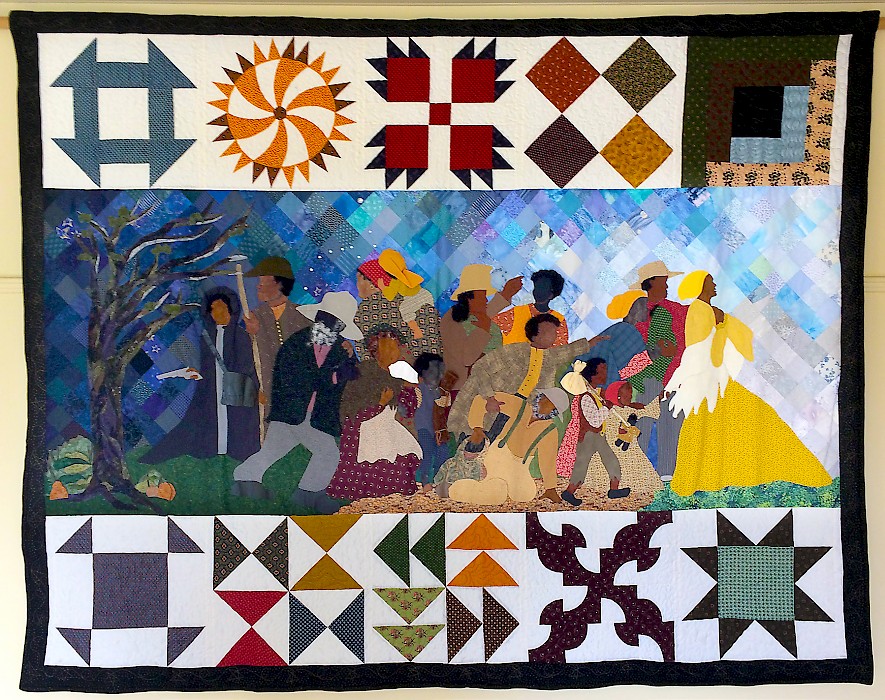 A quilted mural commemorating the Underground Railroad now hangs on the east wall of the Gallery between the Alford Centrum and Dickhaut Library on the MTSO campus. The 8- by 6-foot quilt, titled “Into the Light,” was sketched by MTSO alum Lynda Ryan (MA in Christian Education, ’94) and completed in September 2006 by a number of quilters in the San Antonio, Texas, area.

The quilt, which has been displayed throughout Texas over the past 10 years, was donated to MTSO after Ryan learned of the school’s cooperative relationship with the National Underground Railroad Freedom Center in Cincinnati. Ryan offered the quilt as “a visual reminder God is beckoning us all into the light.”

The mural depicts Harriet Tubman guiding escaped slaves through dangerous territories to freedom in Canada during the 19th century. The geometric blocks bordering the top and bottom of the mural recreate a quilt code shared by Ozella McDaniel Williams, whose ancestors used the code, known only to other African-Americans, as a geographic guide to safety.

Methodist Theological School in Ohio prepares leaders of many faith traditions for lives of lasting significance in service to the church and the world. In addition to the Master of Divinity degree, the school offers master’s degrees in counseling, theological studies and practical theology, along with a Doctor of Ministry degree. Engage with MTSO through Facebook and Twitter (@MTSOedu).