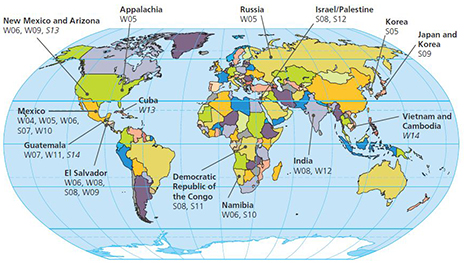 The 200,000-mile threshold most likely was crossed sometime in 2012. It might have been during the India trip in January, or Israel/Palestine in July. But those whose cross-cultural immersion travels comprised those miles will tell you the distance, while significant, is only part of the story.

MTSO, which has a long history of providing intercultural education, took a significant step in the fall of 2002, when it introduced the cross-cultural immersion requirement for incoming Master of Divinity students. A visit to Mexico in January 2004 was the first of 25 MTSO cross-cultural trips in the past eight years.

To understand the unique value of these trips, it's worth considering what they aren't. They're not whirlwind vacation tours, marked by three great photo ops each day. Nor are they mission trips.

"We go to listen and learn. We don't go with answers in hand," said Tim Van Meter, assistant professor in the Alford Chair of Christian Education and Youth Ministry, who is in his fourth year coordinating cross-cultural trips.

Each trip includes at least two weeks in a different culture and is part of a three-credit- hour course. A trip is bracketed by pre-immersion and post-immersion sessions on campus. While it's common for trips to include stops at historically and culturally significant sites, a key component is the students' interaction with others: the people of the area they're visiting; faculty members leading the expedition; local experts on history and context; and their own peers.

"We tend to go to places that really shake you," Van Meter said.
"In India, you have people living on the sidewalk who are envious of the people living in cardboard behind them." To add context, "We have graduate-level lectures and learning about economic, political, social, cultural and theological understandings from people who are there – not only our faculty but folks there who have the credentials to engage them to think theologically."

"The idea is that we shift our world view," said Lisa Withrow, associate academic dean and professor in the Dewire Chair of Christian Leadership. "We begin to think about what it might be like to have another person's perspective, if we can possibly do that. Some students initially resist the cross-cultural program because they say they travel a lot. I've traveled a lot, too, and until I went on cross-cultural trips, I didn't understand how much of a tourist I was, rather than a human being with potential for solidarity with others."

Withrow, who has led three cross-cultural trips, gained a new appreciation for MTSO's approach when she participated in a national research team that conducted a recent two-year study of 10 seminary cross-cultural and intercultural programs with funding via a Wabash grant.

"MTSO, compared to some other institutions, has an intentionality about our program's focus on student worldview challenges," she said, giving credit to the time MTSO's travelers spend in structured discussion before and after a trip. "Those who take our trips spend a great deal of time in the pre-immersion sessions talking about cultural difference. And I think the post-immersion debriefing and processing is even more important than the pre-immersion sessions."

Van Meter, who has led two trips to India, said the time committed to the trip and the interaction among students also are vital to the experience: "We're there two weeks to 15 days, and we consider it barely long enough to actually be there, because it takes that long for people just to arrive in a new place. About days 7 through 10, people can actually be there."

"This is about doing theological reflection as a community, in the midst of some very different understandings of the world," he said. "Even if you've traveled a lot, you can learn something new from your peers. I'm all for travel as an individual or as a family, but when you're with a group where people host you as a group, you engage them differently."

This level of engagement requires a major commitment from students and faculty.

But the Wabash-funded research team's report on cross-cultural programs makes the case for its necessity in preparing a new generation of religious leaders.

"Today's ministry contexts are reflective of major demographic changes and the increase in cross cultural interactions and shifts in cultural norms that accompany these changes," the report says. "For example, it is decreasingly likely that the ethnic identity and cultural background of a seminary graduate will match closely that of her or his ministry setting. It follows, then, that intercultural immersion programs are a critical component of seminary curricula."

Van Meter said cross-cultural education at MTSO is intended as a framework, central not only to academic work but to engaging in leadership and service in whatever environment a graduate encounters.

"Cross-cultural is important to our understanding of the entire curriculum for the M.Div.," he said. "When these courses are effective, people are still doing theological reflection years later. I had people six years after India say, 'I finally got this part we talked about there.'"