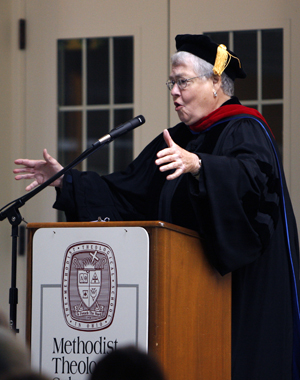 Pioneering United Methodist Bishop Judith Craig died Jan. 18. Her loss is felt keenly at MTSO, where she served as a trustee, bishop in residence and visiting professor of church leadership.

Her memorial service will be held at 2 p.m. Feb. 2 at Broad Street United Methodist Church in Columbus.

“Bishop Craig was a central figure in the life of MTSO as our bishop in residence and a leading figure of United Methodism,” said MTSO President Jay Rundell. “She moved with grace and purpose in this life and had a tremendous influence on thousands of us who were blessed to have her in our midst.”

Before becoming bishop, she served in roles from youth director to parish pastor for congregations in Missouri, Connecticut and the Cleveland area.

Four colleges and universities presented her with honorary doctorate degrees. In 2000, a home for orphans near Monrovia, Liberia, was christened the Bishop Judith Craig Children’s Village.

In 2016, she lent her name to MTSO’s Bishop Judith Craig Scholarship Endowment, established to benefit those exploring a call to ministry by minimizing their financial burdens and enabling them to better concentrate on their preparation to serve.

Craig delivered MTSO’s 2008 commencement address, in which she offered graduates the following advice for dealing with resistance to change.

I’m reminded of the story of a farmer who hired a builder to come and use the finest materials and build a beautiful barn. Then the farmer went out and got on his tractor and bulldozed down the old barn.

And the next day there was a storm threatening, but the farmer went into town anyway. And the storm hit, and the sleet was going sideways, and as he drove home, he was smiling to himself because he thought of his cattle in that nice, warm barn. He’d left the doors open so they could get in.

But when the farmer got home, he found the new barn empty. He went back out in the sleet and the wind, leaned into it as he walked toward where the old barn had been. And there, huddled in the wind and the sleet, were the cattle – inside the foundation of the old barn.

Recognize that? You’ll encounter people like that. Just then, dig out your patience and your modeling and your best invitational self. Pull out those great biblical illustrations about God’s future and the wonderful stories of church history. And then go and stand with those miserable cattle in that wind and love them anyway until they will finally begin to follow you into the new barn.